How A Linear Accelerator Works 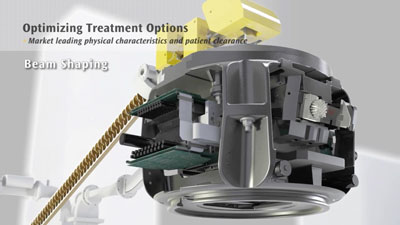 IMRT is a specialized form of radiation therapy that allows radiation intensity to be changed (modulated) during treatment to precisely focus the radiation to cover just the tumor, thereby sparing normal surrounding tissue.

With IMRT, the radiation beam can be broken up into hundreds of “beamlets,” each of which can be adjusted to a different degree of intensity. In some cases, because of its extreme focus, IMRT can safely allow a higher dose of radiation to be delivered to a tumor to stop or slow its growth.

VMAT is an advanced form of IMRT in which a single or multiple radiation beams sweep in arcs around the patient rather than remaining static. VMAT delivers a high-powered, targeted dose of radiation with minimal damage to surrounding tissue and critical anatomy, and because of its accuracy is often used for tumors that are adjacent to organs.

VMAT uses 3-D imaging to allow the radiation oncologist to verify the position of the tumor immediately prior to treatment, and to monitor the treatment in real-time to ensure the dose is delivered as prescribed.

VMAT cuts treatment time significantly, which both lessens the amount of time patients must remain motionless and reduces the possibility that they will compromise the aim of the radiation by moving.

Learn more about how to prepare for radiation therapy treatment.