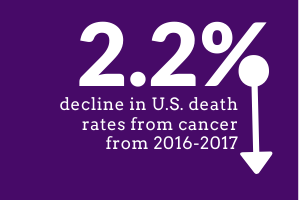 Cancer death rates have been steadily declining since their peak in 1991, including drops in the most common types of cancer: lung, breast, prostate, colorectal, and melanoma.

The report credits the decline in smoking and improved early detection methods of the drop in deaths from lung cancer. For other cancers, earlier detection, better screening practices (including colonoscopies and skin cancer screening) and more advanced treatment methods have contributed to the continuous decline in cancer deaths.